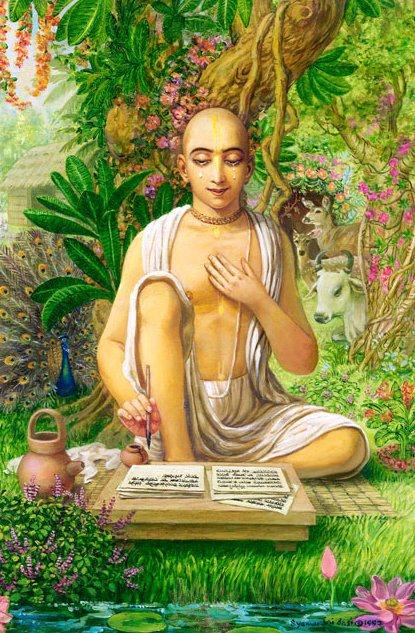 All glories to Srila Rupa Gosvami whose picture is before me, chanting japa under a blossoming kadamba tree. That tree is blooming in response to Rupa Gosvami’s ecstasies. Rupa Gosvami is happy to see Radha and Krishna unite, and unhappy when Radharani suffers in separation from Krishna.

And here is the photo of Prabhupada on the wall of the van. It is the one where he is sitting on an old-fashioned wooden chair. There is a calendar from the “Calcutta Trading Company” up on the wall behind him. Srila Prabhupada is serene, his arms are thin, the corners of his mouth are downturned. And he too, like Rupa Gosvami, has his right hand in a white japa bead bag. They are my preceptors.

All glories to Srila Rupa Gosvami and Srila Prabhupada
whose photos are before me,
both chanting japa with
their hands in bead bags.
Rupa Gosvami sits under the
kadamba tree, which
blossoms when Radha and Krishna
are in union, and shrivels
when They are apart.
Srila Prabhupada is in a room
in Calcutta, chanting
and conducting the
Hare Krishna movement.
Both gosvamis are very
dear to Lord Krishna, and
they are spreading the
message of Lord Caitanya
all over the world.