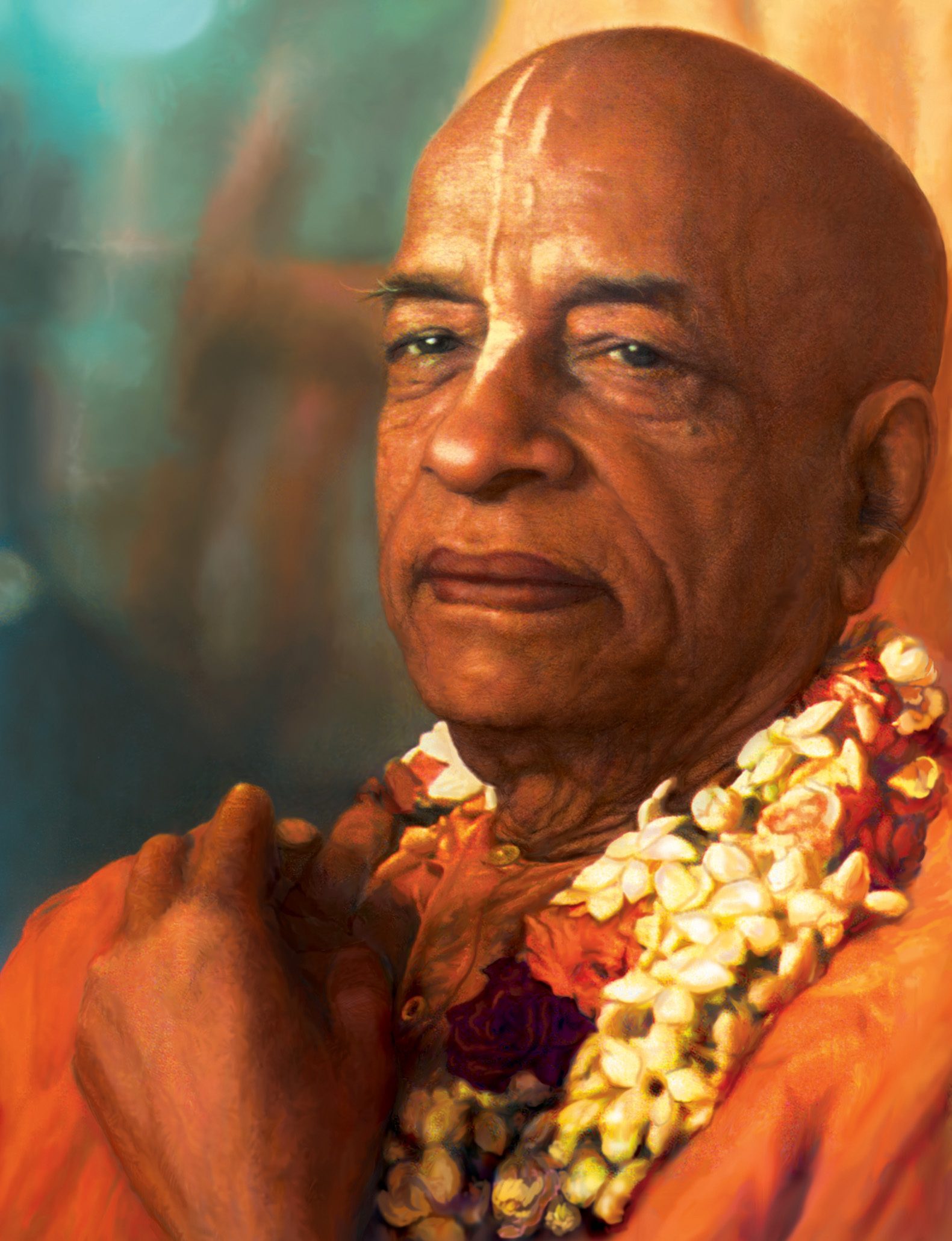 Srila Prabhupada is the eminent guru of Indian descent who brought Krishna consciousness to the Western world. His fascinating life has been beautifully chronicled by his disciple Satsvarupa dasa into seven volumes known as the Srila Prabhupada-lilamrita, which has been translated into multiple languages and is enjoyed by people all over the world.

Srila Prabhupada was born into a Vaisnava family on 1 September 1896 in Calcutta, India.  His parents named him Abhay Charan De (one who is fearless, having taken shelter at Lord Krishna‘s feet.) He graduated from the prestigious Scottish Church College in 1920, with majors in English, philosophy and economics. However, in a display of solidarity with Gandhi’s independence movement against British rule in India, he refused to accept his diploma.

In 1922 he met his spiritual master, Bhaktisiddhanta Sarasvati Thakura, a prominent scholar in the Gaudiya Vaisnava tradition.  Bhaktisiddhanta requested that he spread the  ancient knowledge of the Vedas in English to the Western countries. Srila Prabhupada was already married and running a small pharmaceutical business at that time. His wife was pious and devoted to Lord Krishna, but didn’t share his enthusiasm for preaching and writing about the philosophy. In the following years Prabhupada wrote a commentary on the Bhagavad-gita, and in 1944 started Back to Godhead, an English fortnightly magazine still published today by his disciples. In 1947 the Gaudiya Vaisnava Society recognized his scholarship and honored him with the title “Bhaktivedanta” (one who has realized that devotional service to the Supreme Lord is the end of all knowledge.)

In 1954 Srila Prabhupada retired from family life and entered vanaprastha, dedicating himself completely to writing and studying the Vaisnava classic literatures. He set up residence in Vrindavan, the birthplace of Lord Krishna. In 1959 he accepted sannyasa, the renounced order, and began his life’s opus: translating and writing commentary on the Srimad-Bhagavatam.  With beginning the translation of the Bhagavatam from Sanskrit to English, Prabhupada was preparing to fulfill his spiritual master’s order to preach in the West.

But the best was yet to come – Prabhupada’s initial English translation would prove to be the first stepping stone in “a lifetime in preparation.” As Satsvarupa Goswami wrote years later in the authorized biography Srila Prabhupada-lilamrita, Vol. 1, Ch. 10: “He had not come to Vrindavan to die and return to Godhead. Rather, he had come because it was the ideal place to gain spiritual strength for his main life’s work. The exact shape of his future mission Bhaktivedanta Swami did not know, but he did know that he must prepare himself for preaching Srimad-Bhagavatam to the English-speaking Western world.”

So in 1965 at the age of sixty-nine, he left his homeland on a freight ship bound for the United States of America. He was finally on his way to fulfill his master’s desire to distribute bhakti yoga (the practice of devotion to the Lord) outside the borders of India. While on board the ship, he survived two heart attacks. When he arrived in New York City,  he had about seven dollars (in Indian rupees) and his precious books.

In the beginning, life for Srila Prabhupada in New York City was not easy, but slowly his spiritual message reached many young people. He chanted the Hare Krishna maha-mantra in Tompkins Square Park and gave lessons on the Bhagavad-gita at the Lower East Side Matchless Gift Shop, where Satsvarupa Goswami first met him. Krishna was providing potency, and after only one year, Srila Prabhupada was able to register the International Society for Krishna Consciousness (ISKCON) as a society. It was the beginning of the spiritual revolution in the West that Srila Prabhupada had already envisaged.

Prabhupada had an extraordinary capacity to preach according to the mentality and  culture of the people he was dealing with. He was a wise innovator and empowered his students to teach Krishna consciousness using different approaches: public singing (kirtan), book distribution, university lectures, festivals, food relief programs, establishing temples, developing rural farm communities to protect animals, commissioning new drawings to skilled artists – he was tireless in his efforts. If a preaching strategy was not effective enough by Prabhupada’s standards, Prabhupada and his disciples would explore new possibilities until they got the results Prabhupada wanted. Disciples were energized by  Prabhupada’s strength and vision, and found they were capable of doing things they would never have imagined they could do – like running temples, writing articles and books on Vaisnava philosophy, or even teaching in countries far away from home.

In the twelve years that Prabhupada was with us – from the time he arrived in America in 1965 until his departure from this world in 1977 – this charismatic spiritual pioneer developed a resume of incredible successes:

In 1977, at the age of 81, Prabhupada left this world in Vrindavan, India under the loving care of his disciples, who continue his worldwide mission. He is still present through his books, legacy projects, strong memories and loving service of his disciples around the globe.  His motto he lived by is easy to remember and apply: “Chant and be happy.”