Truthfulness – the last leg of religion 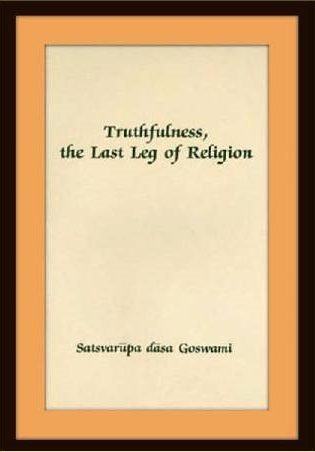 Truthfulness – the last leg of religion

The Age of Hypocrisy

A hypocritical act that is easy to fall into is to think that because one is on the path of Krishna consciousness, he is therefore automatically better than every devotee of every other sampradaya. We are very fortunate to be on the best path, the path of bhakti-yoga, but how far have we traversed the path? Does Lord Caitanya’s trnad api mood call for a pride that “I am better than others”? A manifestation of this mistake is to compare the ideal of Krishna consciousness with the realities of other religions. When we do this, we consider other religionists as hypocrites who do not follow the commandments of their own scriptures and who have no genuine love of God. But not all religionists are at that lowest level.

To claim that all members of the Krishna consciousness movement are free of taint and hypocrisy is another kind of dishonesty. The Krishna consciousness membership has its “dirty laundry” (leaders and members who deviate, a high percentage of marriages that break up, and so on). We do not need to advertise our mistakes, but neither should we lie about them. And neither do we need to enthuse ourselves by unfair comparisons or coverups. With conviction (nistha) that devotional service to the Supreme Personality of Godhead is the highest goal, we may go forward with becoming confused by other sampradayas—but without stooping to the tactic of comparing our scriptural ideals with others’ sordid realities.

As long as a person maintains material desires in his heart, he will sometimes cheat in order to acquire an apartment, food, friends, wealth and so on.

In order to acquire these things he has to cheat others, and this creates enmity even among the most intimate friends. Sometimes this enmity is created between the conditioned soul and the father or spiritual master. Unless one is firmly fixed in the regulative principles, one may perform mischievous acts, even if one is a member of the Krishna consciousness movement.

Cheating is never condoned by sincere members of the Krishna consciousness movement. But serious lapses in morality may occur in the lives of those who are struggling to come to transcendental life. There is always a difference, however, between devotee and nondevotee moralists. A nondevotee moralist may display all good qualities ethically, but he lacks the most important consideration of all—rendering sacrifice to the Supreme Lord. For example, Lord Krishna says:

The devotees of the Lord are released from all kinds of sins because they eat food which is offered first for sacrifice. Others, who prepare food for personal sense enjoyment, verily eat only sin.

A devotee offers food to the Supreme Lord and eats the prasadam. Srila Prabhupada says, “Without God consciousness, nobody can be ethical.”

All the demigods and their exalted qualities, such as religion, knowledge and renunciation, become manifest in the body of one who has developed unalloyed devotion for the Supreme Personality of Godhead, Vasudeva. On the other hand, a person devoid of devotional service and engaged in material activities has no good qualities. Even if he is adept at the practice of mystic yoga or the honest endeavor of maintaining his family and relatives, he must be driven by his own mental speculations and must engage in the service of the Lord’s external energy. How can there be any good qualities in such a man?

Aside from pure devotees, there are also mixed and pseudo-devotees. Lord Kapila states (Third Canto of Srimad-Bhagavatam) that devotees may be mixed in the modes of passion and ignorance. He advises us not to associate intimately with such persons. Bhaktivinode Thakura, writing after the disappearance of Lord Caitanya Mahaprabhu, counted no less than twelve pseudo-sects of followers of Lord Caitanya, and he clearly exposed their discrepancies. So it is not disloyal or improper for devotees to point out where cheating occurs even among the membership of the Krishna consciousness movement. Those who are actually pure devotees are faultless, and those who are aspiring to be devotees will eventually reach that stage. But when hypocrisy occurs, it should be pointed out for the purpose of rectification.

Some of the prominent deviations from Vaisnavism include prakrta-sahajiya, professional Bhagavatam reciters, yajnic priests, and those who claim to be brahmanas by birth.

The prakrta-sahajiya is one who takes Krishna consciousness very cheaply, and acts as if he has reached the topmost stage of conjugal loving exchanges with Radha and Krishna. His imitation sometimes involves illicit sex in the name of appreciation of the rasa dance. The professional reciters of the Bhagavatam concoct a system of a seven-day hearing of the Bhagavatam in which they mainly recite the confidential sections of the scripture, although they and their audiences are unfit to hear them. The Bhagavatam reciter is mostly motivated by economic greed.

The cheap reciters of the Bhagavatam are very much enthusiastic about the Lord’s internal potential activities, and the pseudo-devotees, absorbed in material sense enjoyment, falsely jump to the stage of liberated souls and thus fall down deeply into the clutches of external energy.

In former yugas, a system of sacrifice used to be performed for gaining material benefits. The sacrifices were very scientific, and mainly depended on the process of vibrating mantras with particular accents. Due to a lack of qualified brahmanas, this science has been out of practice for thousands of years, and therefore anyone who is performing such a yajna today is just pretending. Prabhupada writes:

. . . such performances of sacrifice are no longer effective. Nor are they recommended in this fallen age. Any such sacrifice undertaken in this age as a matter of show may simply be a cheating process by the clever priestly order.

The only effective sacrifice in this age is sankirtana-yajna, chanting of the holy names.

So-called caste brahmanas claim that one who is not born in a brahmana family cannot receive the sacred thread or become a high-grade Vaisnava, but this interpretation is not accepted by Bhaktisiddhanta Sarasvati Thakura or Srila Prabhupada. Neither is it supported by Rupa Gosvami or the Vedic scriptures.

Imitation is always a false display. We are warned not to imitate Haridasa Thakura, who used to chant 300,000 names daily. Similarly, we cannot imitate Srila Prabhupada, who preached Krishna consciousness all over the world, and was honored by his disciples as a maha-bhagavata. There is a distinct difference between sincere following and imitating the example of great teachers. Those who are expert at analyzing their own situation honestly, or who can analyze the behavior of others, will be able to distinguish the imitations from the genuine articles.

When a devotee receives initiation but later breaks his vows, that is a form of cheating on the orders of the spiritual master. This cheating can be done in a gross or subtle way. An example of gross deviation was described by Bhaktivinode Thakura who spoke of a “Vaisnava,” who wore neck beads but who was actually a kali-cela, a devotee of Kali, and whose “bhajana” was illicit sex. Gross misbehaviors and illegal and immoral activities bring shame to the reputation of the spiritual master and the Krishna consciousness movement.

Subtle deviation occurs when a person presents himself as a respectable follower, but breaks the rules in subtle ways. For example, one important prohibition is to avoid illicit sex. In grhastha life this means to engage in sex only for the service of Krishna, which is for procreation within marriage. But the deviant disciple may take his own interpretation of this rule and claim that as long as he only engages in sex with his wife and not with others, then he is following his spiritual master’s order. Another prohibition is against meat-eating. The actual spirit of the injunction is that one should offer all of the foods that he eats to Krishna and take the remnants as prasada. One may deviate, therefore, by being a vegetarian, but by being negligent in offering suitable foods to the Lord. A disciple may be able to hide some of his deviations from others, but Krishna in the heart sees everything, and we get the results of our activities.

Psychologists cannot comprehend transcendental reality, but some of their analyses are applicable to devotees as well as nondevotees. The psychologist Kohlberg outlined stages of moral development which he conceived of as universal. He claimed that there was no observable difference in moral behavior based on the fact that one belonged to a particular religion. In other words, young Christian boys were not more morally developed than were Buddhist boys, or vice versa. What is of interest for our purposes in the moral development stages outlined by Kohlberg is that they are similar to stages of development for a Vaisnava according to Rupa Gosvami. Researchers Malinowski and Smith describe Kohlberg’s model as follows:

In his cognitive developmental theory, Kohlberg postulates an invariant sequence of stages of moral development beginning with obedience to external rules and fear of punishment and culminating in adherence to self-chosen universal principles of justice.

Is this not similar to the progress of a devotee from initial behavior based on the rules and regulations, followed by voluntary submission in love to Lord Krishna?

We should not be bewildered by the fact that there are moral discrepancies among aspiring Vaisnavas. Wrong behavior is never condoned, but the devotees are always optimistic about the benefits, spiritually and materially, that will be accrued by a steady following of the bhakti-marga.

It is not easy to be a devotee in Kali-yuga, but it is certainly possible. Prabhupada used to say it is easy for those who are simple and difficult for those who are crooked or unsubmissive. We should not be discouraged by the fact that we have bad habits and a tendency to cheat. Even persons who were considered great criminals in society, such as the hunter Mrgari, became pure Vaisnavas when they submitted to the teachings of the spiritual master, Narada Muni. Another disciple of Narada Muni’s was formerly a robber and murderer but became converted into Valmiki, the spotless author of the Ramayana. The path of success is to surrender to the order of the spiritual master, and give up our cheating.