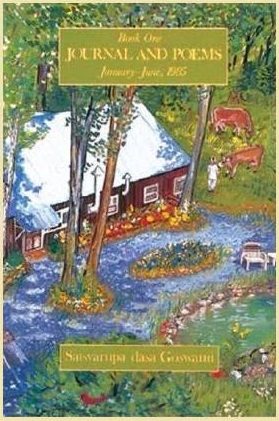 From time to time I’m reminded of and embarrassed by the limitations of my existence here. In a Bhagavatam class, Prabhanu dasa spoke about the rare opportunity of human life. He said that now at Gita-nagari one can see so many forms of life, and yet very, very few of them are able to receive Krishna consciousness.

Only the human being is qualified to receive knowledge of Krishna. Yet I have been spending much time communing with the lower species of nature—forest animals, birds, and flowers. Sometimes I rejoice in this communing, which I have not done previously in my life, but at other times I’m reminded that it is not the business of the preacher to commune with creatures who cannot perceive the message of Bhagavad-gita.

Of course, my present limited situation is imposed upon me by my illness, and I try to see the bright side of it. But as I wrote in my poem about cardinals, I am eager to return to the rigors and rewards of intense association with other people. Yet during this period, if I take solace in and learn some of the secrets of nature, that will also enhance my Krishna consciousness. So although this year I am handicapped, I do have special advantages.

We are encouraged to pursue variety in spiritual life. But this is different than mere fickleness or a lust for novelty. In the spiritual world, the eternal associates of Krishna see endless varieties in their worshipable friend and lover, Sri Krishna, and thus life with Him is described as ever fresh and infinitely blissful.

Along with the infinite variety of experience in the spiritual world, life there is also infinitely steady. The cowherd boys and gopis do not seek out a friend or lover other than Krishna. In fact, the gopis infinitely prefer Krishna to stay in Vrndavana, and when Krishna goes to Dvaraka they are no longer attracted to Him in the same way. They want to be with Krishna in Vrndavana, and they don’t wish their life with Him there to be disrupted.

The boys also want Krishna’s constant association. When taking rest at night, they count on seeing Krishna in the morning. They want to go to His house early in the morning and see Him dressed by mother Yasoda, and then they want to go out to the cow pastures with Him and play and watch Him kill demons and take part with Him in all kinds of sports. Nor do they expect this life with Krishna to be disrupted.

As we train ourselves in Krishna consciousness, we too should cultivate variety, steadiness, and loyalty in our devotional routine. A steady devotional routine is not necessarily cause for boredom or restlessness for a devotee. Rather, such a routine is a reflection of the blissful peace and security of Vaikuntha, where Krishna is always present and where one is always engaged in one’s rasa with Him through infinite, diverse and yet familiar exchanges.

So I do not despise the fact that the same sun rises each morning, or that I am greeted by the same songs of the birds every day. And neither do I wish that a Deity other than Radha-Damodara appear on the altar at mangala-arati. But what I despise is my own dullness and lack of devotion.

I’ve given a good try with both naturopathic and allopathic doctors and medicines. Now we try Ayurveda. Prabhupada accepts Ayurveda as part of Vedic culture, and in his books he always refers respectfully to Ayurvedic science. In one place, Prabhupada writes, “The Ayurveda-sastra recommends ausadhi cintayet vishnum: even while taking medicine one should remember Vishnu, because the medicine is not all-in-all and Lord Vishnu is the real protector.” (Bhag. 10.6.27–29, purport)

The Srimad-Bhagavatam also refers authoritatively to the powers of Ayur Veda. Dhanvantari, an incarnation of Krishna, first gave the science to Brahma, and Brahma taught it to the first physicians, the Asvini-kumaras. The Bhagavatam describes how the Asvini-kumaras then rejuvenated the old sage Cyavana.

In his own life, Srila Prabhupada preferred Ayurvedic treatment, although he acknowledged that there are many quacks. When Prabhupada suffered paralysis in 1967, he wrote to a friend in India asking for Ayurvedic medicines, and he considered the possibility of sending tickets for a doctor to come to New York. “I may inform you that I am inclined toward Ayurvedic treatment,” he wrote. “You can consult the Ayurvedic physician in Vrndavana who is a Gaudiya Vaisnava . . . Consult necessary physicians and let me know what to do. In Mathura there are undoubtedly many Ayurvedic physicians and many quacks also. Try to avoid the quacks.”

Srila Prabhupada’s last physician was an Ayurvedic kaviraja, and Prabhupada much preferred him to the dreaded prospect of receiving allopathic treatment in a hospital. I recall how Prabhupada would converse from his bed with his kaviraja in Vrndavana in those last days, and how they would both quote the Bhagavatam phrase, bhavausadac chrotra-mano ‘bhiramat. (Bhag. 10.1.4) With this phrase, both kaviraja and Prabhupada acknowledged that the real medicine was to chant and hear the holy name and also that even temporary cure was simply dependent on Krishna.

Prabhupada often derided Western science, and he looked down upon a dying Godbrother’s desperate technological attempts to recover his health by going to a hospital.

So Sananda Kumara has arrived here with his tin trunk, straight from Kottakkal, Kerala. He is thirty years old, and is an initiated disciple of my Godbrother Srila Acaryapada. He described a treatment of medicines, oil inhalations, oil application, and massage of the head, and the entire treatment is to take four weeks. He doesn’t seem to be making many demands on diet or other activities, while he is eliminating my bicycle rides and some yoga asanas. I was eagerly awaiting his arrival, but I realize that the treatment, even if successful, will work slowly. At least I’m enrolled in a Vedic program, and I may utter “Sri Vishnu” with transcendental faith, while drinking down bitter combinations.
One of the biggest challenges before me is to gain self-control, to be patient, and to restrain myself from performing my normal activities. To restrain myself in body and mind from engaging in even the most common and natural services requires a special type of sense control.

We have to fight real battles, not those we only imagine. My fight is to get well. That is the immediate task before me. This seems enough, but there is a tendency to worry about imaginary problems, imaginary battles, and how we may fare in them. Rather than mustering our efforts to fight the actual opposition before us, we become distracted. Even though this present battle is small and inglorious, I must be victorious here in order to take up grander battles with more glorious victories.

Arjuna wanted to go “beyond” the duties of a ksatriya and to take on the difficult austerities of a wandering mendicant. But Krishna told him to face the battle before him. So now I fight the battle of refraining from all reading, writing, and traveling.

I regularly have nagging feelings about not preaching. I’m confined now and can’t preach, but even when I was healthy I didn’t preach enough. I have to be careful to distinguish the two and not to feel guilty about being ill.

While listening to Baladeva read an earlier section of this work, I commented that some of our manager-preachers might say, “What kind of a book is this, all about plants and flowers? Where’s the preaching?” But people in America are pluralistic. They do not all believe in the same thing. Even those in the majority have many different tastes and feelings. And aside from the majority, only individual “majorities of one” become devotees. Because there are so many different kinds of people, our preaching has to be divided. Someone may preach to the scientists, someone may preach to the rock and roll kids, and someone may preach to the lowest common denominator. I think this book with a lot about nature and meditation will actually be popular. For instance, Baladeva’s sister visited yesterday and bought a poetry book. And she is an interesting kind of person. I can see that she would like to hear some of my reflections about wildflowers and how they relate to Krishna consciousness. We have to distinguish between different classes of people in material life, and we have to make Krishna consciousness attractive to everyone individually.

An Offering to Krishna

Bug-chewed rose bush,
give just one bloom,
and I’ll offer it to Krishna.