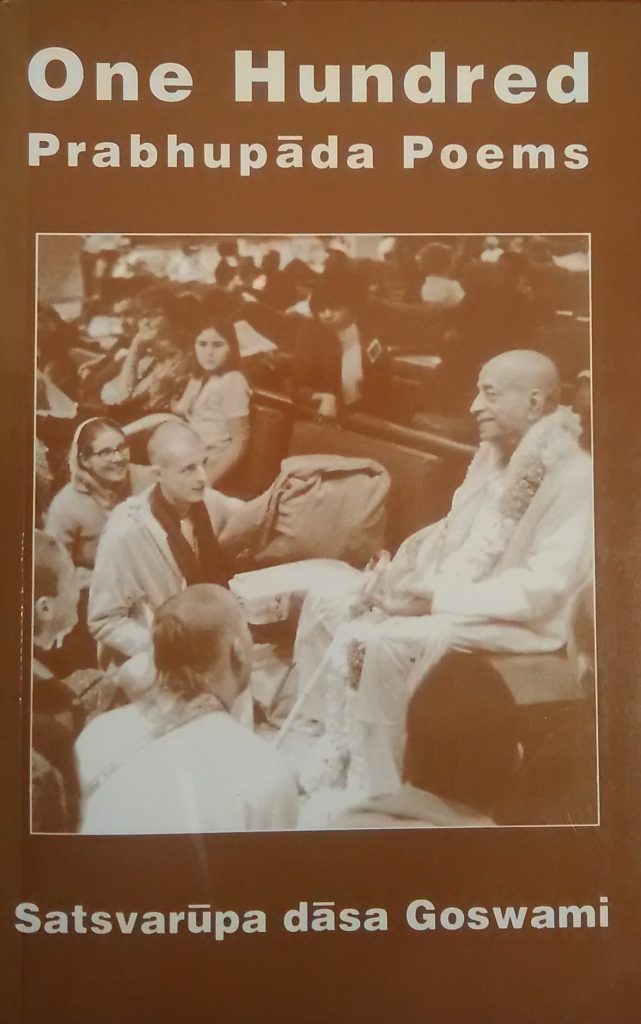 How could devotees gather
on a farm in Poland
and in cities of Poland
except that Your Divine Grace wanted it?
Of course, Lord Caitanya wanted it,
but He picked you to deliver
the Hare Krishna movement
which is carried on now by your followers.
Going through the samsara song,
happy to see the friendly forms
of Panca-tattva. We joined
Gaura, Nitai and Gadadhara
with Their arms upraised,
and then palms joined
like Sri Advaita and Srivasa Thakura.
All this is due to your mercy.


Prabhupada, I am happy,
the tulasis are green and bushy,
the ladies are chaste, the men are
pure and hard-working, no one cynical,
everyone following the sastra,
the Bhaktivedanta purports are translated
into all languages,
mangala-arati in every home and communes
spotted all over forest and city. The dawn rising,
even birds sound auspicious, and the leftover moon.
This is the prediction of Lord Caitanya.
All glories to Srila Prabhupada.

Prabhupada is preaching, and I am
like a cricket by the hearth,
listening 20 years later.
He’s talking to a professor in L.A.
The door squeaks and more guests come
into his room. “Hare Krishna.”
He’s telling them all, though facing the professor—
even a little God consciousness is so valuable.
His disciples were drug-addicted but gave it
up at once when he asked them.
“Your government is spending millions of dollars to stop
the drug habit, but it is all failure.”

Prabhupada says, “I’m a Hindu
so I may accept Krishna as superstition, you may think.
But then why these boys and girls
of Europe and America,
why they have accepted Krishna?”
Even the Christian priest was amazed. He said,
“These were our boys but they didn’t care
for God. Now they are mad after God.”
I’m sitting in a corner listening
fighting off demons of sleep,
inattention, faultfinding—
they bite me like fleas …
I go on listening and
pray to be his sisya always,
and to preach like him,
fresh and innocent
strong as iron bars
and soft as a rose,
full of life—and, secret to us,
his eternal rasa.
“What do you think?” he asks the professor,
and the man’s reply is lame.
No one can stand before him.
That’s how I feel, and it’s a fact.
I pray to worship and serve him always
with heart in the right place.

You explained your success:
“I never compromised
with anything which is not spoken by Krishna.
Did you mark, it or not?”
I marked it, Srila Prabhupada
and now you are marking me.
Please keep me despite my defects,
please don’t give up training me.

He lives in his books and in the
memories of his disciples,
Some devotees dream of him.
The GBC says even an uninitiated bhakta
can dress the Prabhupada murti.
No one is stopping anyone from going to him
in his room in Vrndavana except
at 7 P.M. on the annual observance
of his disappearance.
And then it’s senior devotees only
(unless you can squeeze in somehow).
I was there, holding the arati flame,
standing by his rose-covered bed,
blowing the conch
in the room packed with his devotees.

And so my dear master, you have gone
to your nitya-lila, leaving us here
quarreling (thus proving personalism).
Sometimes the leaders get together
and declare, “Now we are cooperating
as never before,” while others say
the leadership is uninspired.
Prabhupada left in 1977.
It was what Krishna wanted.
I am finding my way
to serve you
in separation.

Prabhupada’s my father
telling me what I must do.
I don’t want to be surly
to this father. He really loves me and is
very wise. He loves Krishna
and the Lord loves him dearly.
Prabhupada is my mother,
makes capatis and puris better
than peanut butter and jelly sandwiches,
treats me tenderly,
asks for my well-being: “Sats-var-oop?”

I am his affectionate child,
selfish and wrong in many ways.
Seems I can’t be reformed.
Always some lacking.
I do some things well but
the report card says,
“Could do better.”
Prabhupada is my teacher,
mystical guru,
inconceivable medium
to all-attractive Krishna in Goloka.

He has many concerns.
I demand something just for me.
I want him doting and sweet for all of us,
like sitting around in his room at 26 2nd Avenue
or Mayapur in the frankincense smoke
and talking of old days.
Prabhupada has to wrestle with
headstrong disciples,
give advice to intelligent ones—
those willing to sacrifice homeland and
comforts. He imparts marching orders to them
and at those times I lag behind waiting
for the sweets.
He knows these deficiencies in me.
He said, “Satsvarupa is a perfect gentleman,
but he cannot manage.”
He knows me from way back,
and he has something for me to do.
Maybe I could cook for him,
re-learn the standard sukta prep,
or maybe this poem.