Can you practice Vrindavana-bhajana in the West? 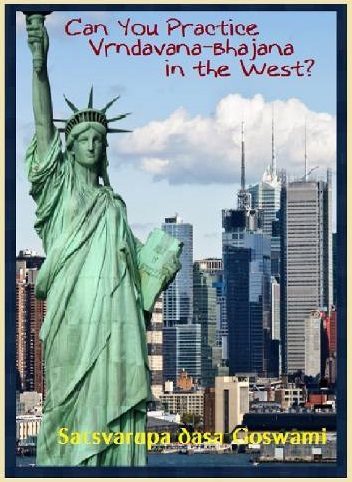 Can you practice Vrindavana-bhajana in the West?

Smaller tree bushes sway in a breeze but the pines don’t move much. This is the Lord’s external energy. As those who don’t have love of God are requested to bathe in Radha-kunda again and again, so we have to repeatedly bathe our minds in the pastimes of Radha and Krishna—we want to think of Them even when we gaze out the window and see the wind-blown trees. Without Their presence, the swaying branches (and even Their picture on the altar) doesn’t open the bliss for you.

Manu phoned from Dublin to say he had picked up our passports from the Indian Embassy with stamped visas for India. He will keep them in his money belt and deliver them to us on Saturday.

Other India news: I read in the biography that when Prabhupada went to Vrndavana in early August 1967, “the daily temperatures rose to more than 110°, and Swamiji and Kirtanananda had to stay inside with the doors shut and the overhead fan on.” Another description states that when Prabhupada sat down on the veranda outside his room at the Radha-Damodara temple, “his body instantly became covered with flies. Kirtanananda and Acyutananda were always being bothered by the flies—this was the rainy season—but Swamiji scarcely noticed them and sat quietly washing his hands.” (Prabhupada, p. 134).

The concept of Vrndavana in the West comes up in describing Prabhupada’s visit in May 1969:

“Comparing New Vrndavana to the Vrndavana in India, Prabhupada said that New Vrndavana was in some ways better, since Vrndavana, India was now congested with worldly men. Five hundred years ago the Gosvami followers of Lord Caitanya had excavated the sites of Krishna’s pastimes in Vrndavana, and only pure devotees had lived there. But in recent years, Vrndavana had become a place for materialists and impersonalists. New Vrndavana, however, should admit only the spiritually inclined.”
—Prabhupada, p. 149

This supports the view that in the U.S.A. or anywhere, one can develop a “New Vrndavana” by simple living and high thinking. Prabhupada wanted a Vedic way of life for the entire world—and country living with agriculture, cow protection, and simple amenities was ideal. In fact, the attempt to set up such farm communities in ISKCON has only been partly successful. One of the big difficulties is financial support—the farms, so far, are usually paid for by outside sources of income, such as devotees selling paintings, and so on. But another conflict is that farm work is so taxing and absorbing that the leaders of the individual farms don’t find much time—or taste—for chanting and hearing.

One could argue that the six Gosvamis of Vrndavana weren’t interested in developing farm communities. Their example is a different one. To practice Vrndavana-bhajana in the West, do we first have to purchase hundreds of acres and solve the world’s economic problems by managing a grhastha community with schools, jobs, pasturelands, and Deity worship? These are big questions, and I don’t intend to tackle them.
My program is more individual. I want to make myself Vrndavana-conscious. Is that selfish? No, if I can learn to think of Krishna and His pastimes, then I can preach pure Krishna consciousness wherever I travel, either to the cities or in the country. If I can learn to live in Vrndavana, India, then I can actually become a servant of the Vaisnavas who serve Radha-Krishna. My goal is a less ambitious one in terms of ISKCON’s goals for self-sufficiency—but more ambitious in terms of raganuga-bhakti. Whatever I learn I want to offer to ISKCON’s members and help its members become attracted to Krishna.

Shed your skin and your pretensions, O snake, be a devotee. Put it into writing.

As I write, I hear Madhu standing outside the house talking with a devotee who dropped by. I didn’t bargain for this. If it keeps up I will walk out to the bench despite drizzle and the nearness of Yamuna. Or I could try earplugs in here.

I have grown dependent on consulting Narottama dasa Thakura.

Sometimes we can’t read a list of sacred names with their titles and praises by a Vaisnava author. (It’s probably less pleasing to read it in English than in Bengali.) Our jaded eye glances over the list and then can’t go further. And when the Hare Krishna mantra appears in print, who stops to read all the words one at a time? Who doesn’t glaze over part of it? What kind of reading is this? What else are we looking for?

Narada Muni (in Brhad-bhagavatamrta) asked for the boon that he never become jaded in devotional service to Krishna. Ah yes, I thought, that’s a wise boon. But Sri Krishna said, “That’s a very odd boon, Narada. If devotional service to Me is truly performed, no one will ever grow tired of it.” So Krishna told Narada to ask for another boon.

But Lord, we are so fallen, we have to ask for that first boon. Please protect our fresh eagerness. Let us read a list of names of God and His associates and stop and pray at each name. Let us not be cynical toward the devotees in our lives. Let us stop to hear the Hare Krishna mantra whenever we say it or read it.

“I beg all of you to please be merciful to me. Please do not despise or reject this most fallen person who is approaching you all” (Prarthana, Song 24, text 2).

Narottama can pray like no one else. He cuts through all false and unnecessary verbiage. He keeps intact his humanness and humility even while addressing the Supreme Lord and asking for the rarest favor of direct service in gopi-manjari-bhava. And he means what he says. He sings and cries and manifests other sattvika symptoms in his body. He is a topmost Vaisnava. He teaches us that without receiving the mercy of the guru and the Lord, we cannot survive or progress in spiritual life.

“I hope to one day attain Your lotus feet, and this causes great pain to arise within my mind. I constantly cry, my heart full of suffering.” (Prarthana, Song 24, text 4)

I don’t understand. What is this hope, and why does it cause pain? It is the transcendental emotion of a pure devotee. He suffers because he doesn’t think he will ever attain the goal, but without attaining it, his life is void. In the next verse he says:

“O master, if you are at all merciful to me, then please glance upon me one time. Please dispel the darkness in Narottama dasa’s heart.” (text 6)

I’m settled in among the hay bales. (I tried taking my earplugs out, but M. is still out there talking.) I see the empty steel bucket, the one we use for Yamuna’s evening milk. I am trying to recapture a procedure that worked a few days ago, relaxing and writing without pretension. But it is not a mechanical process. Nothing is quite the same. I have to move along and nibble grass at another spot. I move the milk buckets in front of the door to keep it from slamming shut, but the wind gusts suddenly and knocks over all the buckets. It slams against them again and again. You little controller, you can’t quite set up the world like you want to.

So Krishna drove the chariot for Arjuna. Arjuna ordered Him because they were friends. “Okay,” Krishna said, “whatever you order. I won’t fail to carry it out as your driver.” But when Krishna showed the Universal Form, Arjuna became afraid. He said, “Forgive me for calling You sakha and asking You to drive my chariot and joking with You. You are God, You are not my friend.” But Krishna wants to be friend, son, lover. The devotees like Yasoda-mata and the gopis are always fixed in their intimate rasa. Krishna likes that best.

Arjuna too likes it best when He is the close friend. These are the teachings of Gaudiya Vaisnavism. I am one of the teachers. Don’t laugh, I can do it. Standing in front of a class—I can do it anywhere, at any university. Put me there and I’m not afraid (especially if they are inclined to some religion). Put me in front, and I can give a lecture. So that makes me a teacher.

But the teacher is in the shed saying, “I wish it were all in my heart.” I like the prayer of Sanatana Gosvami after Lord Caitanya finished instructing him. He said, “You have taught me plenty, but how will I, a low person, realize it and speak it to others as You desire? Please put Your feet on my head and bless me with realization.” Lord Caitanya complied with Sanatana’s request. Sanatana knew he needed it. What good is teaching unrealized precepts of love of God?

The teacher wants to go to the shed and shed tears and shed his snake skin and be quiet.