My Relationship with Lord Sri Krishna 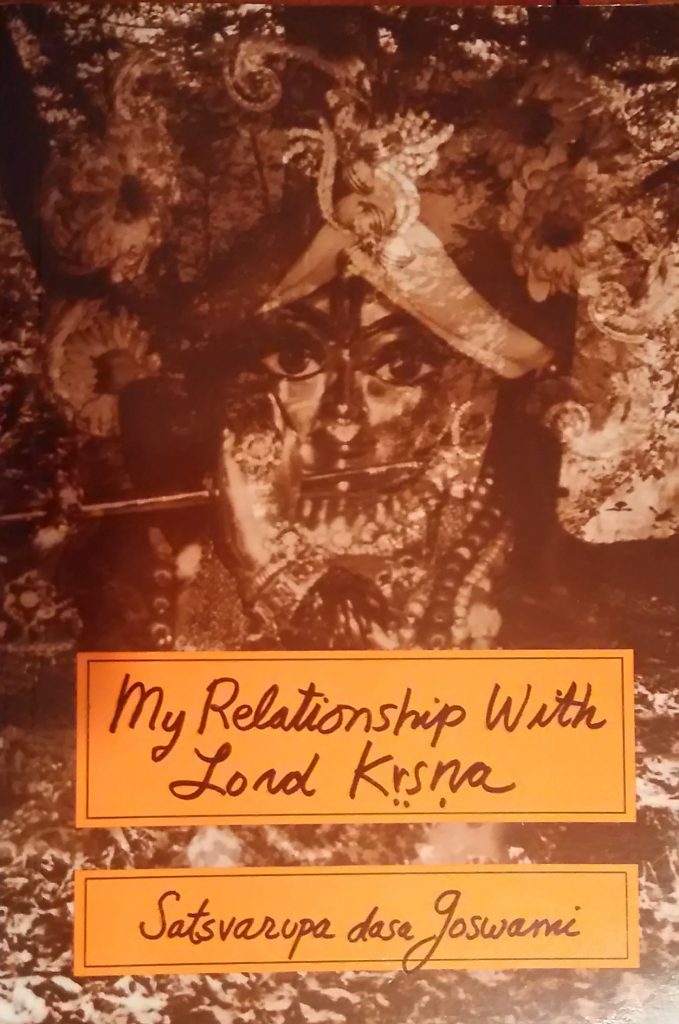 My Relationship with Lord Sri Krishna

We are not alone. Krishna is in our hearts. The yogis and sannyasis know this, and they are never afraid. Krishna protects us, but we should worship Him.

For example, we can develop a relationship with our temple Deity. Most of the ISKCON temples have Radha-Krishna Deities. If someone is interested in his relationship with Krishna, worshiping the Deity is a good way to enhance it. Live in or near a temple and serve the Deity. Go to mangala-arati and, later, to greet the Deities. If possible, be a part-time pujari. Srila Prabhupada said that the pujari is the most fortunate person in the universe. We can see the Deities’ various dresses and think of Them during the day when we are away from Them. We can pray to Them in a natural way.

If we are not pujaris, we can sit before the closed curtains while the pujari makes the offering, and sing of Krishna’s pastimes: Bhaja bhakata-vatsala sri-gaura-hari! Just worship Sri Gaurahari, who is always affectionate toward His devotees. He is the same Supreme God-head, Krishna, who sported in the cowherd pastures of Vraja and stole the hearts of Nanda and Yagoda.” He eats the many fine foods prepared by Srlmati Radharani and Her sakhis. “In great ecstasy and joy Krishna eats the rice, curried vegetables, sweets, and pastries cooked by Srimati Radharani. Krishna’s funny brahmana friend Madhumangala, who is very fond of laddus, gets them by hook or by crook. Eating the laddus, he shouts, “Haribol! Haribol!’ and makes a funny sound by slapping his sides under his armpits with his hands. Beholding Radharani and Her gopi friends out of the corners of His eyes, Krishna eats at the house of mother Yasoda with great satisfaction.”

“Who is such a fool that he does not want to be Krishna conscious by this simple method and thus attain the highest perfectional life of eternity, bliss and knowledge?” (Bg. 9.26, purport).

“To acquire this strong feeling of separation is the teaching of Lord Caitanya and His direct disciplic succession of Gosvamis. When we are not in physical contact with Krishna, we can associate with Him like the gopis, through feelings of separation. . . . Devotional service to Krishna in feelings of separation elevates the devotee to the highest perfectional level, to the level of the gopis. . . . Those who are in the disciplic succession of the Madhva-Gaudiya sampradaya should also feel the separation of Krishna, worship His transcendental form, and discuss His transcendental teachings, His pastimes, His qualities, His entourage and His associations. The spiritual master should enrich the devotees to the highest devotional perfection. Feeling constant separation while engaged in the service of the Lord is the perfection of Krishna consciousness.” (Krishna, Vol. 1, Chap. 34, p. 231)

I’m such a poor spirit. I don’t feel vipralambha. Does Krishna love me?

How do I know?

I believe it. It is stated in the scriptures. Srila Prabhupada told us that Krishna is our father and we are His children. Even when there is separation, the father will not forget his children, although the children may forget their father.

But do I experience His love?

I don’t know what I experience. I know hunger in my belly, and indigestion and fear and anger and various satisfactions and disappointments. I feel elated during kirtana or when I am writing. I miss the devotees. I want Srila Prabhupada to accept me, and I want to please him.

I admit it—there’s a lack of experience of Krishna in my life. I don’t blame Krishna for that. I have failed Him life after life.

Somebody must experience something. Did my spiritual master experience Krishna?

How do you know?

If I told you I saw it in his eyes, would you believe me? We could see in his actions and in his words that A he knew and loved Lord Krishna. Srila Prabhupada always spoke on Krishna’s behalf. He was completely dedicated to Krishna’s mission of reclaiming the conditioned souls back to Godhead. He was Krishna’s ambassador. Certainly he knew—knows—Krishna. Therefore, his pranama-mantra states, “I offer my obeisances to His Divine Grace A. C. Bhaktivedanta Swami Prabhupada, who is very dear to Krishna on this earth, having taken shelter at the lotus feet of the transcendental Lord.” We sing every day that Srila Prabhupada is always thinking of Radha and Krishna.

Okay, but what about me? What is my relationship with Lord Krishna?

That’s what I’m trying to understand. I want my relationship with Krishna to be deep. Deep relationships become tumultuous. Just look at the ocean. Love of God in separation produces tears. Although I don’t experience that yet, I think I should just go on with my service and everything will be gradually revealed. Lord Krishna has promised us that we will know Him, meet Him, and play with Him and His devotees in Goloka Vrndavana. The relationship is already there, and it’s already favorable. I just have to develop it.

Lord Caitanya gave the analogy of the bhakti-lata and showed how it is meant to grow all the way to Goloka. We have to protect it with a fence so the mad elephant of vaisnava-aparadha doesn’t ruin it, but it will grow.

Last night I had a strange dream. I was trying to keep track of material I was putting together for a book. I had my papers in an accordion file and I had also dictated material onto tapes. I was also supposed to take photos and do interviews. None of the material was in a safe place, and we were traveling. Neither did I have any time to work on it. We had to leave the house (or was it a boat?) where we were living, and I had to stash my files and notes in a cardboard box along with others’ belongings. Someone came up to me, handed me a microcassette, and said, “I just found your tape #20. Do you need it?” Then a young woman came to me and said she would give me information about someone she met that would be useful for my project. I started to listen to her, but it was irrelevant and had no connection to Krishna consciousness that I could see. The weather was foggy. I tried attaching a lens to the camera, but it didn’t work . . .

I woke up from this dream with a spark. It seemed like chaos as I recall it. I wasn’t remembering Krishna in the dream. It occurred to me that my mind is like that dream. I try to make a little progress, and then something irrelevant comes up. I can’t control my mind, just as I couldn’t control what happened to the tapes and papers in my files. Someone is often coming up to me to speak something irrelevant. Srila Prabhupada warns, “Don’t waste time, don’t talk rubbish.” He wants us to be like the devotee in The Nectar of Devotion who experiences the symptom of bhava, who is always anxious “whether

I am spending my life in Krishna consciousness and not wasting time.”

My dear Lord Krishna, am I attached to this tragi-comic way of life, where things float in and out of my mind like a crazy dream? I say I want to steadily think of You and Your activities. Please save me from the doubt and lack of taste. I would like to be the servant of Your servant a hundred times removed and be a writer in Your cause.

Sunrise in harbor. Stiff roots from sea like artist’s artifacts. Beach strewn with pebbles. Buttercups on this promontory rock. This day belongs to Krishna. I have nothing to sacrifice or renounce because everything already belongs to Him.

I don’t see Him—I’m blind and lack devotion, although He is everywhere. I want to see Him, but it also seems that I want to keep myself in the center. I don’t want to fall in love.

It’s sad, and I don’t completely believe I’m like that. Everyone wants Krishna’s love.
I want Krishna consciousness. Maybe I don’t believe it could happen to me. But if I became Krishna conscious, it would would be wonderful. I like my life now, but it could be increased thousands of times in happiness. Then I could convey the happiness of Krishna to others. Anyway, I don’t want to remain mediocre. At least I want to allow the possibility to happen—that I can fall in love completely with Lord Krishna.

I will try. I won’t shut up my heart like an oyster. I want Kma’s love. I want to convey it to others. As a writer, I want to give up my little life and tell of the greatest one. Instead of writing from the viewpoint of a bumbling, so-called sadhaka, I would like to write as the one whose thoughts and dreams are filled with Krishna’s attractive and inconceivable qualities, name, and form. How to get there from here?

One thing I can say even now, Krishna is always present everywhere. We just have to find Him out. Srila Prabhupada says a geologist can find gold. We can find Krishna.