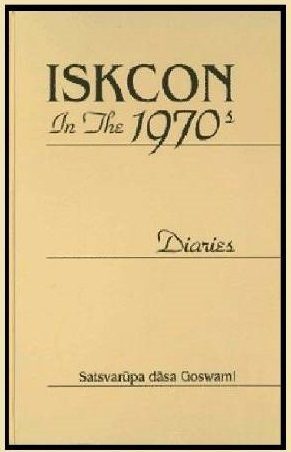 I have been hearing of the activities of a demon in the U.S. called the deprogrammer, who is paid by parents of Hare Krishna devotees to kidnap and torture the devotees into giving up Krishna consciousness and returning to nondevotee life. Last night I woke from a dream and felt like I was under a spell or process which was trying to “deprogram” me. It was not one of intellectual argumentation creating doubts of blasphemy, but an incoherent physical machinery, a feeling seducing my being to consider reality as ultimately sense gratification. It was something that also used to happen to me in my sleep when I was a child. Whatever it was, I learned from it that my chanting has not become very thoughtful or full of pleading to Krishna. Also, it indicated to me a direction in which my preaching to devotees could be most helpful for them: think of preaching as a strengthening of devotees against all forms of deprogramming sent by maya. Prepare the devotees for the fight that is going on even now on all subtle levels. We should be progressing, growing stronger, and should be vigilant against weakness.
Talking here in Detroit with Govardhana Prabhu how Krishna consciousness is not hankering for a position but staying focused on the goal of achieving attachment to Krishna.

I have written to His Divine Grace asking what I should do. Now I am writing essays for a book for use in colleges and preaching. I asked His Divine Grace whether I should take on a project more suitable for a GBC man. My Godbrothers Jagadisa and Rupanuga indicate that what I am doing is very important. GBC means “ideal Vaisnava” and “keeping the standards.” I am satisfied with sannyasa life, not attached to any party or faction, but always traveling and studying, preaching and writing. I am aware my course may be radically altered at any moment by the will of the Supreme. “God disposes.” I am feeling transcendental pleasure and much freedom in this life.

Please accept my blessings. I am in due receipt of your letter dated November 20, 1974 from New York. I am very glad to hear of the continued success of the Library distribution program. You know it that I also was selling my books in this way to the schools and colleges and libraries. I would write, then publish, and then distribute without any help. So how much pleased I am with you that you are helping me in this mission. So you go on with your work. Krishna will help you. You are sincere in your purpose. This is very important engagement of visiting the professors, and the colleges and libraries, and getting the standing orders. This is the most important engagement. Do not doubt this.

It is also good that you are trying for the teaching course. What do the others know? Yes, simply they have written nonsense books. There in America is very good field….

Got a letter yesterday from His Divine Grace. He said going to see professors and getting the standing orders was “the most important engagement. Do not doubt it.” He also said America is a good preaching field. Now I want to be determined to stay with the wonderful devotees in our library party and travel together all over the country doing colleges. When colleges run out, we will have to think of what to do next. At the GBC meeting in Mayapur, I must not look for any new position, but stay with the library work at the colleges and travel, write, preach, be free.

I have to maintain the library party. Although His Divine Grace emphasizes as “greater preaching” book distribution, I don’t seem to do it well whenever I try. I can’t seem to sell them as a salesman—at least not as well as I can do another service, such as lecturing. I would like to push at the colleges with a vigorous preaching program and at the same time maintain the library party, periodically meeting with them. Hridayananda dasa Goswami said he has lost faith in lecturing as effective sankirtana.

I had a dream that suddenly here at this motel (but the motel was in Europe), many devotees gathered and said that Prabhupada was coming. Then he suddenly arrived with a big kirtana. I missed catching a glimpse of him because I was preoccupied with some bit of personal sense gratification. Then I tried to go see him in his room. I was stopped on the stairs by someone guarding his room. I wrote my message down on a piece of paper. I could not write clearly, but managed to scrawl out “Satsvarupa Goswami is here to see Srila Prabhupada.” I remember when writing the word Goswami for my name, I wrote it rather large and was puffed up. Still, the dream is a source of transcendental happiness. I had the dream after first getting up at 1:30 A.M. and reading the verses in the first chapter of the Adi-lila about the spiritual master, who is non-different from Krishna but who is Krishna’s humble servitor.

Always remember Krishna and serve Krishna. Literature devoid of krishna-katha is like a pilgrimage place for crows.

One professor yesterday—Chinese—said, “Who cares about this?” indicating that the important issues are starvation and politics.

They do not know our BBT books can alleviate all suffering conditions.

Yesterday I got another important, inspiring letter from His Divine Grace. He said service to Krishna is not stuck up in one particular service (such as book distribution), but depends on sincere service in any of the nine ways of service. Of the nine ways, sravanam kirtanam is very important. Lecturing is also sravanam kirtanam. I will try, therefore, to put together a preaching program, and at the same time, maintain the library program, which is so dear to His Divine Grace. Also, the inspiring instruction he gave is that one has to render sincere service—whatever one can do or offer, that is suitable and best. “It is not inglorious” for one to think his own service is best. All departments of service are absolute, but one must try to do his service perfectly.

BECOME CONVINCED—I was recently reading books Srila Prabhupada wrote out in longhand as early as 1955 at the Radha-Damodara temple—Science of Devotion, Lord Chaitanya, His Sannyasa and Sankirtana—many of which were never published but were forerunners of his later works, The Nectar of Devotion, Teachings of Lord Caitanya. It is inspiring to meditate on my spiritual master writing so extensively in those days when he was all alone with no big ISKCON movement. I would very much like to write following in his footsteps, out of preaching mood and as sannyasa duty for self-purification. He wrote on and on and produced so many works, even then, which are now benefiting thousands of persons all over the world. Srila Prabhupada once wrote me that by always writing, one’s language will be sharper when he preaches, and one will always be forced—in choosing words—to think of Krishna. Topics later used, early versions of books, bases for philosophic themes are constantly developed as he writes.

Preach, preach, preach, preach. Two classes so far today; one more to go. Four tomorrow. The students were responsive, more or less favorable. It is a great challenge to speak Bhagavad-gita to groups of classes hour after hour. Now I am also getting them to chant. Professors are expressing sincere gratitude that we are coming. Go on with it.