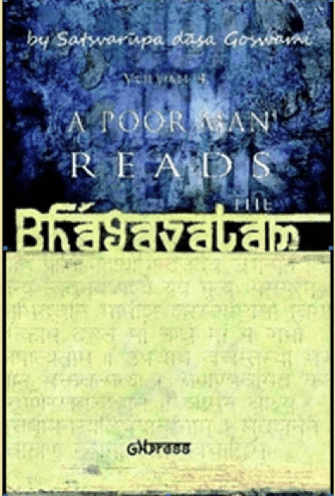 “Arjuna said: O my Lord Sri Krishna, You are the almighty Personality of Godhead. There is no limit to Your different energies. Therefore only You are competent to instill fearlessness in the hearts of Your devotees. Everyone in the flames of material miseries can find the path of liberation in You only.”

Arjuna knows Krishna’s qualities, because they were together in the battlefield of Kuruksetra. The specific qualities mentioned in this verse are that He is almighty and that He can instill fearlessness in the hearts of His devotees. In the purport, Srila Prabhupada describes material existence as “something like a blazing fire in the forest,” and he states that the spiritual master can put out the fire, since he is the “mercy representative” of the Lord. By his words, he can penetrate into the heart of a suffering person and give him transcendental knowledge, “which alone can extinguish the fire of material existence.”

This verse is the first prayer in which Arjuna addresses Krishna before asking Him for release from the brahmastra of Asvatthama. The very first words of Arjuna are filled with emotion and show us a very personal contact between the Lord and His devotees: Krishna krishna maha-baho. Maha-baho is the same address that Krishna used for Arjuna (“O strong-armed one”) in the Bhagavad-gita when Arjuna was confused about his own strength. When Krishna called him maha-baho, He was doing so ironically, as if to say, “Arjuna, you are mighty-armed, but why are you now so afraid to fight and considering yourself incapable?” Was Arjuna now so helpless against the brahmastra that he used his own “title” to refer to Krishna? It almost sounds like, “Krishna! It’s You, Krishna, who is maha-baho, not me. . . What to do, please! Please!” But as we grow older, we may find our hearts become harder as we build up a sort of preconceived illusion of independence toward the spiritual master. Where does that feeling of need for the help of the spiritual master go? It seems to atrophy once the disciple becomes more “mature” in the sense of being beaten up by maya and having committed offenses.

What are the qualifications of the spiritual master who can instill transcendental knowledge in the hearts of the disciples?

He has realized the knowledge, beyond mere book knowledge. His every act is surrender to Krishna. He wholeheartedly serves the mission of Lord Caitanya, the sankirtana movement, the chanting of the holy names. Like the potent husband who plants the seed of pregnancy in his wife, the qualified spiritual master brings about the birth of Krishna consciousness in the heart of the disciple.

Great devotees like Arjuna, fully “aware of the transcendental qualities of Lord Sri Krishna,” praise Him even in the midst of their fearfulness. How can this point best be brought across to the so-called intellectuals or casual readers who may see these prayers and other beautiful Bhagavatam prayers as mere decorative literary ornaments poeticizing the appearance of a mythical Lord rather than real utterances made in the height of distress? After all, wouldn’t great fear normally bring about a lack of clear thinking, what to speak of measured, thoughtful praise?

Tell them of the great qualities of Arjuna, who prayed to Lord Krishna previously on the battlefield of Kuruksetra, and now in one-on-one combat with Asvatthama. He was no ordinary person who ran in panic to a sentimental God in his mind. It is also for the good of others that Arjuna leaves these prayers, so that people can see the proper system for approaching God in distress. Convince them that Arjuna could overcome his panic and become cool-headed and reassured in the presence of his God, as he did at Kuruksetra. As for Krishna being mythical, we have much evidence that this is not so. The experiences of great souls throughout the ages attest to their coming into the presence of the Lord, and they have set it down in the sruti and smrti, or heard and remembered scriptures called Vedic literature. Krishna can be experienced even today by a person who chants the maha-mantra and associates with Him in sound vibration. The sound vibration has power to clean a beginner’s heart and bring him to higher stages of pure devotion, wherein he can witness the names, pastimes, and qualities of the Lord in trance.

Devotee-readers can effectively insulate themselves from slipping into seeing the Bhagavatam as mythology by praying to Krishna, the Lord of the Yadus, the Lord of the gopis. Pray for divine vision. Pray to Lord Nrsimhadeva, with His nails as sharp as thunderbolts, to tear out the doubts in our hearts and install devotion to Him and devotion to the Bhagavatam as it is.

One of the conventions we Westerners have come to accept as familiar about prayer is the way it is offered: kneeling with hands folded in pranams, etc. Would Arjuna have offered his prayers this way?

It was not necessary for Arjuna to follow external conventions in his offerings of prayers. In fact, the Bhagavatam mentions that Arjuna is racing in his chariot with great speed in his chase of Asvatthama. So it might not have been possible to take his hands off the reins or to kneel down on the chariot while praying. A devotee is able to fix himself in samadhi, bringing the mind to the heart and meditating with all devotion on the dearmost. He can do this in any situation, regardless of external distractions.

Was Arjuna praying out loud or in his mind, or does it matter?

It does not matter, but Sanatana Gosvami, in his Sri Brhad-bhagavatamrta, establishes that chanting out loud is more effective than chanting only in the mind. When you chant out loud, you use two senses (mind and tongue vibration), and therefore you have a better chance to capture the flickering mind and fix it on Krishna. Also, when you chant out loud, you give other living entities a chance to benefit by hearing the all-auspicious holy names.

How does the spiritual master save those who don’t want to be saved—for example, those who think, “I like the material inferno. I want to burn there. It feels like home to me.”?

This willful disregard for the mercy seems to mark the worst kind of sufferer: he who does not even have a clue that he is suffering. In Visvanatha Cakravarti’s Sri Gurvastakam, the spiritual master is described as a cloud pouring the rain of mercy on the souls in the blazing world of suffering. But if a so-called disciple runs away from the cloud of mercy or hides himself under an umbrella, then what can a spiritual master do? Sometimes he grabs the errant disciple by the hair and brings him back into the circle of obedience. But if a disciple repeatedly goes away, then the spiritual master is not responsible for such a soul who has broken the essential vows again and again.

“By his words, the spiritual master can penetrate into the heart of the suffering and inject transcendental knowledge, which alone can extinguish the fire of material existence.” In this verse, the spiritual master is considered the “mercy representation” of the Lord, to instill fearlessness into the devotee’s heart. This is indeed wonderful and enlivening to hear. Still, sometimes a disciple may experience this as theoretical only.

What is it that allows the experience of a genuine guru-disciple relationship to be realized, and result in real fearlessness? What is the disciple’s responsibility in this matter? And what about a spiritual master who is unable to function as “mercy representative” of God to his disciples, due to his being overly selfish?

The duty of a disciple is to surrender to the order of the spiritual master and serve him with love. A perfect example is our Srila Prabhupada, who took the order of Bhaktisiddhanta Sarasvati Thakura to preach in the Western countries and went at an elderly age and in poor health to America. Prabhupada demonstrated great fearlessness in the midst of his unsteady situation. He was granted that by Krishna directly. As for the spiritual master who is unqualified to give fearlessness due to his being “overly selfish,” he should not have taken disciples to begin with. A spiritual master has to be focused on Krishna and on his spiritual master, and then he will be in the position to give mercy to those who come to him for shelter. If he is selfish and interested only in his self-gratification, he will not be able to pass on the mercy which he has inherited from the Lord and the guru. Therefore, the real connection will not take place.