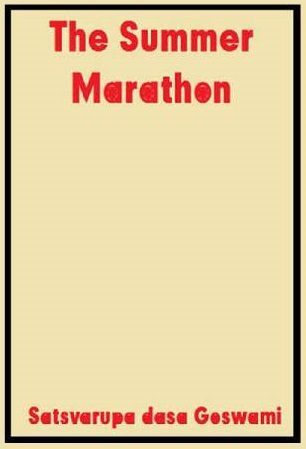 Yesterday you signed your autograph in books. Today you are back to point one again, asking yourself are you humble, do you have love for Krishna, and are you compassionate to preach? I looked at my essay, “Krishna Recognizes the Preacher,” to see why Sacinandana Swami said it was good. The main thing he found inspiring was the quotes from Srila Prabhupada. The essay focuses on the Vaisnava’s compassion and quotes one of the best references to preaching in Srila Prabhupada’s purports. It’s no wonder that one would find this inspiring. It’s Lord Siva’s expression when he went to swallow the ocean of poison to save the universe. “It is said that great personalities almost always accept voluntary suffering because of the suffering of people in general. This is considered the highest method of worshipping the Supreme Personality of Godhead who is present in everyone’s heart” (Bhag. 8.7.4).

I should never desert the preaching field. Srila Prabhupada said he wanted to die on that field, like a warrior who dies in battle. How I may preach, whether by writing, taking care of disciples, and how to do that—these are important details. But somehow don’t forget that people in general are suffering and Krishna consciousness is great mercy for them. Take trouble to give it to them.

“The Vaisnava understands that Krishna wants to bring the conditioned souls back to Godhead; therefore he takes the same mood as Krishna. He doesn’t become Krishna yet he thinks like Krishna: He wants all the conditioned souls to go back to Godhead. Look at them, they’re all suffering. They should be enjoying with Krishna. Krishna wants to enjoy with them. They are so unfortunate.’ That’s the mood of the Vaisnava, . . . Within the realm of devotional service, the quickest way to get Krishna’s recognition is to become a preacher. Krishna notices those who try to help others come to Krishna consciousness.”

You have to risk and suffer for helping others. I so much like to avoid the dangers of Croatia and Serbia. I want to travel on the autostrade. I ask for medical exemption. Concessions for senior devotees. Treat me gently, I’m a writer. Don’t intrude on my privacy because in solitude I’m preparing a nice message for the people—so don’t strain me or subject me to the wear and tear of socializing. Yeah, yeah.

The Beatles sang, “She loves you, yeah, yeah, yeah.” I’m a devotee, I’m an angel, a special writer, a jewel of ISKCON, yeah, yeah, yeah. I’ve got bad ankle, bad headache, good purpose in prose and poem, I read poetry books to learn from them . . .

Now this early hour in prose run-on. The young boys and girls in this temple look up to us. Bow down to them too. M. and I have so much inside strategy to get through the entanglements. It’s a fact people and situations can entangle you and before you know it, you get a headache or your time is wasted. So you plan how to get through it without offending anyone but not getting caught up in their games and trips. I’ll give the lecture if they ask.

It’s important to be vigilant, cautious. Srila Prabhupada says that in the purport for today’s verse. Maharaja Bharata was somehow not vigilant, and so affection for a deer fawn entered his life and eventually ruined his worship of the Supreme Lord. Be vigilant. Therefore I joke about my lack of pure Krishna consciousness.

Heschel: “Kotzger and Kierkegaard revealed how twisted man’s inner condition was and suggested a way out of it that was straight if hard. Both were passionately concerned with the problem of what man means to himself. Beckoned to soar to infinite heights through his spirit, he proves too earth-bound to make the voyage.”

Heschel says that Kotzger and Kierkegaard were criticized for not being concerned with the sociopolitical dimension of religion existence. They regarded individual choice in its purest form as the key issue. I seem to have a kindred sympathy for that way of life. I focus on myself. I thus imply that everyone should focus on the self, on purity of inner motives. We see how motives can be corrupted even while carrying out religious duties. I want to talk on that if they ask me to give the Srimad-Bhagavatam class.

Maharaja Bharata gave up things that are hard to renounce, and he surrendered his life for the spiritual cause. But then he redeveloped material attachment. I think many young persons, such as those here in Slovenia, come to Krishna consciousness and give up careers and girlfriends, etc. But in the guise of religious life, our material desires may resurface. Srila Prabhupada called this “hippie seeds.” Or he gave the example of the bed bug who appears to be dead, but at the right season he bites again. Dangers: pride as a preacher or devotee, fault-finding, misuse of facilities offered to a preacher, laxity in chanting and hearing. Follow the two tracks, bhagavata and pancaratriki.

So you ask yourself, “Am I a hoax?” You catch yourself at something. One writer called this “catching butterflies.” Like a butterfly hunter (unseemly analogy), you are always looking to catch the absurd and the inconsistent anarthas in yourself. Ah, there you go again, being a nonsense. See it at an early stage; be prepared to nip it in the bud. Be able to laugh at yourself.

Even teaching, always thinking of oneself as the instructor, can be a wrong attitude. I try to write for myself to escape that. One has to teach and be a crafty person (“the art of teaching”) when lecturing. But then give us relief from that. The teacher has to be a student also. At least I crave that. A student of whom? Of Srila Prabhupada, of course. I do that by reading his books, repeating his philosophy in new ways, in my own words. And I am a student also—of life. A student because I admit I am not a master. The teacher assumes that he is better, somehow, than the students in his class. At least he usually doesn’t focus on his own improvement at that time. Teaching could do this, however; the teacher is also learning and remaining humble.