From Copper to Touchstone 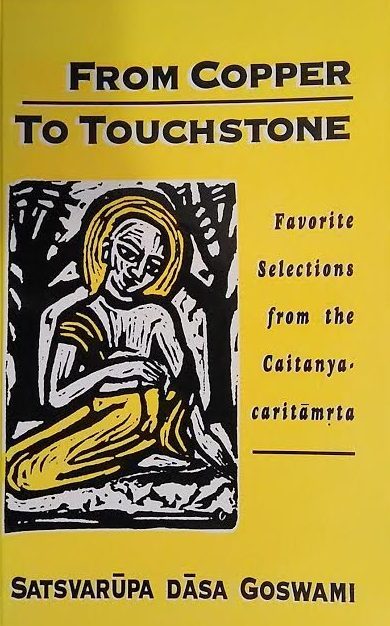 From Copper to Touchstone

In this chapter, we will cover Ramananda Raya’s third and fourth statements to Lord Caitanya, and the Lord’s rejection of them.

When Lord Caitanya replied, “Eho bahya,” Ramananda Raya replied, “To give up one’s occupational duties in the varnasrama is the essence of perfection.” It is as if Ramananda Raya thought, “All right, since you have rejected varnasrama as the perfection, and also the giving up of the fruits of varnasrama work as an offering to Krishna—therefore, I will suggest to give up varnasrama. That is the essence of perfection.” In other words, he recommended tyaga, or renunciation, as the goal.

In support of this proposal, Ramananda Raya quoted the Bhagavad-gita’s concluding verse, “After giving up all kinds of religious and occupational duties, if you come to Me, the Supreme Personality of Godhead, and take shelter, I will give you protection from all of life’s sinful reactions. Do not worry.” (Bg. 18.66) Using Bhagavad-gita 18.66 to support his argument was certainly a strong move. Srila Prabhupada considered this verse to be the last word in the Bhagavad-gita. However, quoting a verse does not necessarily win an argument.

Why did Lord Caitanya reject this proposal? In a Madhya-lila purport (8.61), Srila Prabhupada states that renunciation is on the material platform. It is the opposite of sense gratification, but is not in itself transcendental. In the third chapter of the Bhagavad-gita, Lord Krishna warns against premature renunciation, before the heart is purified. The most obvious example of this is the giving up of family duties in order to take sannyasa.

To become a sannyasi or give up all worldly duties, is a necessary stage in varnasrama life. But Prabhupada writes,

“If one accepts sannyasa at an immature stage, there is every possibility of his being attracted by women and lusty desires and thus again becoming a so-called grhastha or a victim of women. Such a person is most shameless and he is called vantasi, or one who eats that which he has already vomited. He certainly leads a condemned life. In our Krishna consciousness movement it is advised, therefore, that the sannyasis and brahmacaris keep strictly aloof from the association of women so that there will be no chance of their falling down again as victims of lusty desires.” (Bhag. 7.15.36, purport)

In general, Lord Caitanya advised against a person entering the sannyasa order. He personally demonstrated this in the case of a brahmana whom the Lord met at Kurmaksetra. Lord Caitanya stopped there briefly and the Kurma brahmana became attracted to Lord Caitanya. He proposed that he leave his family duties and become the Lord’s traveling companion. Lord Caitanya replied, “Don’t speak like that again. Better to remain at home and chant the holy name of Krishna always.” (Madhya 7. 127)

In his purport to this verse, Srila Prabhupada writes, “It is not advisable in this age of Kali to leave one’s. family suddenly . . . It would be better to remain with his family and try to become purified by chanting the Hare Krishna maha-mantra regularly under the direction of a spiritual master. . . . If this principle is followed by everyone, there is no need to accept sannyasa.” Lord Caitanya advised the Kurma brahmana in a positive spirit to become an ideal householder and to advise everyone he met to chant the Hare Krishna mantra.

The practical challenge before most devotees today is how to live successfully in grhastha life. The grhastha-asrama is not easy. There are many spiritual and material obstacles. But the endeavor should not be abandoned. We shouldn’t consider the grhastha-asrama expendable. Premature renunciation results in bhoga-tyaga, whimsical vacillation between enjoyment and renunciation.

Grhastha life is not material. The use of the word asrama denotes that the householder is living in a spiritual order. Therefore, his job is to reform his life within his asrama according to the rules and regulations of that asrama. The grhastha can purify himself, just as a sannyasi or brahmacari can become purified by following the main limbs of vaidhi-bhakti and not becoming distracted by impure mixtures of jnana or karma.

Becoming mature enough to enter the sannyasa order does not constitute perfection. Therefore, the act of external renunciation cannot in itself be considered the sarva-sadhya, or the goal of perfection. In Teachings of Lord Caitanya, Srila Prabhupada writes, “Because in simple renunciation there is no conception of spiritual planets and spiritual activities, Lord Caitanya rejected this third proposal.” (p. 298)

Prabhupada writes, ” . . . Ramananda Raya suggested that devotional service based on philosophy and logic is a more progressed position.” As evidence, Ramananda Raya quoted Bhagavad-gita 18.54, brahma-bhutah prasannatma … This verse implies that if one fully realizes the theory of monism, he will become liberated and eligible for devotional service. Lord Caitanya had already stated that renunciation is material. The elimination of material desires does not bring us beyond the Viraja.

Ramananda Raya now asserts that the goal is bhakti, but bhakti attainable through philosophical realization. The concept of perfection is contained in the word brahma-bhuta. Brahma-bhuta is characterized by joyfulness and the relief of all material lamentation and hankering. But Srila Prabhupada defines brahma-bhuta as “freed from material conceptions of life, but attached to an impersonal situation.”

The defect in jnana-misra-bhakti is that the jnani seeks liberation by merging into the Supreme Lord’s effulgence. A pure devotee always rejects this ekatva-mukti. The devotee even rejects the four kinds of Vaisnava or personal liberation, even if they are offered to him by the Supreme Lord.