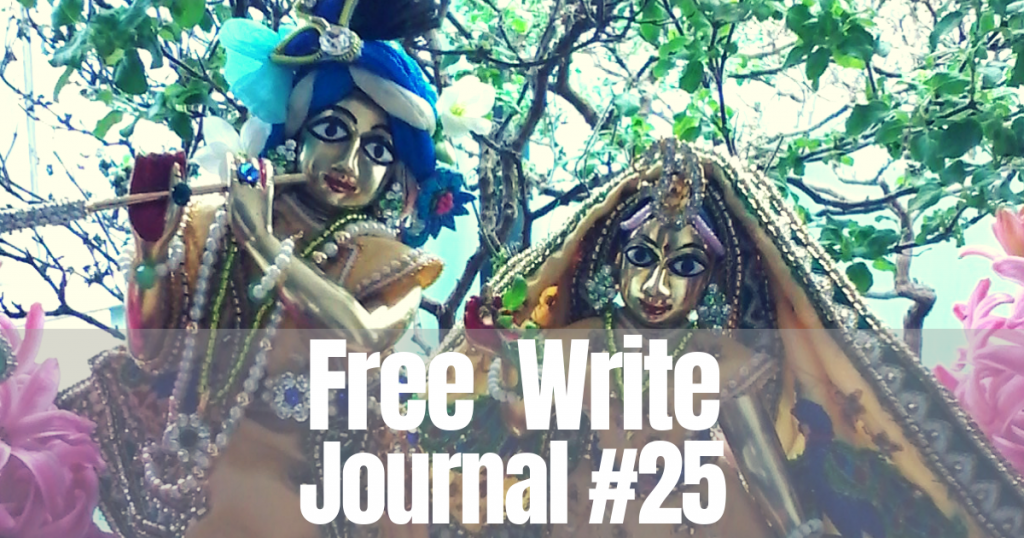 POEMS/From Every Day, Just Write. Caitanya-candrodaya has several times referred to the book as a “retrospective.” When a famous artist exhibits his paintings done over a period of years, they call the exhibit a retrospective. My book is a retrospective of my poetry. It was written in the late 1990s. I like the idea of putting the words “A Retrospective” on the cover, but maybe most readers wouldn’t understand it. I’ll write to Caitanya-candrodaya and ask him what he thinks. One who knows the use of the word in connection with artist’s exhibitions will have no trouble understanding what I mean. But those who don’t know the use of “retrospective” may find no meaning in it.

Maybe we could dedicate a front-matter page to defining the word, to make things clearer. For example: “Retrospective: when an artist exhibits a sizeable amount of his or her oeuvre, showing the art’s evolution and development and change with time.” Or: “Retrospective: when an artist exhibits a large portion of his work over the years, displaying the evolution of development, style and themes. The word retrospective can also be used for literary art when presented in an evolutionary way.”

Subuddhi Raya, a rich merchant, was converted into a Muslim by Hussein Shah, who poured water on him from his pot. Five hundred years ago the Hindu social system was so strict that that was all it took to convert a Hindu into a Muslim. Subuddhi Raya went to a brahmana and asked him what he should do. The brahmana told him he should kill himself by immersing in boiling ghee. Subuddhi Raya went and got another opinion from a different brahmana. This brahmana told him his offense wasn’t so great and that he shouldn’t kill himself. Now Subuddhi was even more confused. He went to Lord Caitanya for His judgment. Mahaprabhu told him to go and live in Vrndavana and chant the maha-mantra incessantly. He did that and lived by collecting dry wood and selling it for fuel for a few paisa. He used the money for his own needs, and he provided Bengali Vaisnavas who came to Vrndavana with rice and yogurt, since they couldn’t digest capatis that were being made in Vrndavana. The recommendation to chant Hare Krishna incessantly was also given as an order by Narada Muni when the hunter Mrgari surrendered to him as a disciple. Nowadays we’re not recommended to “chant incessantly.” It is not possible, and we are meant to engage in preaching activities. But that stark command, “Chant incessantly,” stands as a guaranteed way to eliminate sins and uncover one’s dormant love for Krishna and the Vaisnavas.

To make a change from Manohara’s heavy Italian meals, Baladeva prepared American sandwiches for lunch. But then he ate such a large amount of sandwich ingredients that it didn’t turn out to be a light meal for him. I ate less, but I still weigh more than he does. I am 185 lbs. and he is 179 lbs. I am puzzled why I am gaining weight. It doesn’t seem to be by overeating. Maybe it is my sedentary lifestyle.

D. devi dasi wrote me that she reads Prabhupada’s books and my books, but she also reads books about St. Francis and other saints. She says she feels she benefits by reading about bhakti on these other paths. I didn’t write back to her anything about it, but I don’t think it’s a good thing for devotees to read many books on different paths. I did some of it in Entering the Life of Prayer, but then I weaned off.

Watching Baladeva perform a 4:30 arotika. He lights five sticks of incense and offers them first to his Guru, then Prabhupada, then Gauranga, then Radha-Govinda. Then he makes a wider circle: Guru, Prabhupada, Tulasi-devi, two pictures of Lord Caitanya, and resting on Radha-Govinda. In the circle there is all around.

I have finished my sixteen rounds. Writing after puja. Pay attention to Their dresses. Prabhupada is neat with his silk garland, light wool chadar, and sannyasa clothes. One of Lord Caitanya is a sculpture of Him in a dancing pose with His arms upraised, urging the people to chant and respond. The other picture is Him in the Gambhira chanting beads, pacific, the painting commissioned by King Prataparudra. This is my wonderful morning program with my family of Deities.

Visvamitra Muni and Haridasa Thakura are a study in contrasts. Visvamitra was a great meditator. He closed his eyes so as not to be distracted, and he meditated on the Absolute Truth. Indra was afraid of Visvamitra’s powerful austerities, so he sent one of his society girls, the beautiful Menaka, to cause Visvamitra’s falldown. She walked before him, but he couldn’t see her. Then he heard the tinkling of her ankle bells; he opened his eyes and saw her standing before him seductively. He became implicated, and by their sexual union the child Shakuntala was born. But Haridasa Thakura did not fall down. First a young prostitute was sent to him to make him break his vow. He turned her into a Vaisnavi. Then Mayadevi, the external energy in person, appeared before him and struck attractive poses and begged for union with him. He assured her but said he had to go on chanting to fulfill his quota. Eventually, as Mayadevi chanted along with him, she became influenced and converted to a Vaisnava devotee of Krishna by the influence of the holy name. Formerly Mayadevi had been chanting the mantra of Ramacandra’s names. Now, by the influence of Haridasa Thakura, she incessantly chanted the names of Krishna and felt increased pleasure and freedom from material life. Haridasa Thakura, like Narada Muni, was a touchstone, turning iron into gold on contact.

Prabhupada is my mentor,
he is my boss.
Prabhupada is my eternal father,
he personally told me so.
Prabhupada is my Swamiji,
from 1966-68
until he told us to
call him Prabhupada
which we accepted joyfully.
In the 21st century he is
with us in his vani
which is more powerful
and permanent than
his personal presence.
He is my beloved and he
knows me by my name,
“Satsvarupa dasa.” I pray
that he will remember me
and recommend me
to Krishna–to enter the spiritual world.
I want to meet
him there and take
up his service. Or if he is in the material
world preaching, I want
to join him there
and work in his mission.
Let me remember Prabhupada
wherever I go. Let
me never forget that I am
his humble cela,
and may I never
disobey him.
Prabhupada, I honor all
your followers and
bow at their feet:
I will associate with
your devotees and not
withdraw or mix
with nondevotees.
“Please accept me as
an atom at your lotus feet.”

Lord Caitanya, Ramananda-Raya and other intimate associates are gathered at Haridasa Thakura’s place to hear Rupa Gosvami read excerpts from his two dramas, Vidagdha-madhava and Lalita-madhava. The devotees are overwhelmed with admiration for Rupa Gosvami’s writings, and as Ramananda-Raya says, “These are not verses in a drama, this is a ‘shower of nectar.’” The dramas require an introductory verse dedicated to the author’s worshipable Deity. Rupa Gosvami hesitated reading them because his subject of worship was Lord Caitanya. As soon as Lord Caitanya heard the verses, He was inwardly pleased but He spoke with outward anger. He said, “Your descriptions of Radha and Krishna’s pastimes are like wonderful sweet rice. But why have you put this detestful portion of alkali in the mixture? It is an exaggeration, and people will laugh at it.”

Ramananda-Raya said, “It is not a portion of alkali, it is a portion of camphor making the composition even tastier.” Many wonderful verses are recited, and one wants to re-read the two dramas again. It was my habit in Geaglum, North Ireland to bathe Radha-Govinda and change Their dress while listening to these two dramas. I wrote about the puja details and excerpts from the dramas. Sometimes the two descriptions seemed to merge, and it made you convinced that the puja was not a worship of idols. Srila Prabhupada once said, “Do you think we are so dumb that we worship lumps of brass?” Everyone praises Rupa Gosvami, and they agree that he has been empowered by Lord Caitanya to write like this. Mahaprabhu says, “I met Rupa Gosvami and saw that he was a fit person to receive My mercy. He and his brother Sanatana are equally empowered. They live in Vrndavana as mendicants, and on My order they write books and excavate lost places of pilgrimage.” Ramananda Raya is also an expert composer of dramas, and he asks Rupa Gosvami very technical questions about the methods he used in writing. Rupa Gosvami answers with Sanskrit terminology, but he says, “I am impudent to talk in front of you.” Lord Caitanya says Rupa Gosvami originally intended to write one drama about all the pastimes of Krishna. But Mahaprabhu said to him, “Don’t take Krishna out of Vrndavana. Krishna never leaves Vrndavana.” Rupa Gosvami considered the Lord’s statement, and he decided that he would have to write two dramas, one of Krishna’s pastimes in Vrndavana (Vidagdha-madhava), and one about His pastimes in Mathura and Dvaraka (Lalita-madhava). Lord Caitanya’s statement was confirmed by an earlier dream Rupa Gosvami had when he was staying at Satyabhama-pura. Satyabhama appeared to him and said, “Write a drama about me, and it will come out very beautiful.”

I had time to write from 5:00-5:50 A.M., but I was too sleepy. Now I’ve taken a shower and Baladeva said, “You feel refreshed now? Are you fired up? Are you ready to chase a bear with your Dictaphone?” I do feel more awake, but what is the subject matter?

The most heartbreaking scene is Krishna and Balarama leaving Vrndavana for Mathura on Akrura’s chariot. The gopis faint and even try to block the horses, but Akrura is expert to avoid them from stopping him. Krishna sends a message, “I will be back,” but everyone in Vrndavana–parents, friends, and gopis–is put into despair. That is why I say this is the most heartbreaking scene. The gopis have given everything to Krishna, and now He is leaving them to meet with Kamsa! Kamsa has arranged a wrestling match with hulky professional wrestlers against the young boys Krishna and Balarama. Kamsa actually aims to kill the boys in this way. He also has planted a gigantic elephant at the entrance to the stadium who will attempt to block Krishna and Balarama’s entrance and kill Them before the wrestling even begins. It seems the odds are heavily against the two Vrajavasi boys, but They will come out triumphant, as They always do. It is all a plan of Krishna’s, to increase the love in separation of His devotees. But it is inconceivable, why He apparently puts them into such suffering and stays away for so long. Although Krishna causes the residents of Vrndavana acute pain by leaving them, He introduces them to vipralambha (love in separation), which is even higher than love in union. And when all the demons are killed and the Dvarakavasis are pacified, Krishna will return to His home in Vrndavana and satisfy the gopis, Nanda Maharaja, Yasoda-devi and the cowherd friends.