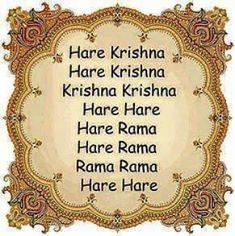 I woke up at midnight
and could not get back to sleep.
I turned on the light and rang the cowbell.
Baladeva came in and administered wake-up rituals,
including the “pre-emptive strike” headache medicine.
(The National Headache Foundation newsletter
recommended this method
in a feature article as
the best method of treating migraine –
catching it in the bud
before it develops.)
I used the walker to go into the room
where the Deities are and bowed down.
I began japa early, using
all the precautionary measures.
I chanted silently, at a moderate pace,
with my eyes closed.
I practiced “just hear.”
I am completely satisfied with this method
and am capable of it.
You simply chant and hear the words
of the Hare Krishna mantra with no
other meditation.
It is recommended by Srila Prabhupada.
There are higher stages of perfection in japa,
but “just hear” is elevated in itself.
Anyone who understands that the Name
is non-different from Krishna Himself,
and who absorbs himself
in the transcendental sound vibration,
is achieving a rare stage of japa.
I pray to attain qualification
in this method. I experienced
no sign of right eye twinge.
Since I started early,
I met my quota after four rounds
with ample minutes to spare.
After this I turned
to writing my experience
in the Japa Report, as a
change of pace and
relief from the intensity
of constant chanting.

I began the second set in the same way.
Although I was chanting silently in the mind
I heard the names clearly, with attention
and concern to pronounce the words properly.
I felt the beginning of a right eye twinge,
but it wasn’t much so I ignored it.
I was distracted by planning what to write in my Japa Report,
although the distraction was somewhat reduced because
I had already partially written my account.
Nevertheless, I was committing aparadha:
inattention to the holy names,
so my chanting was faulty.
But the mercy and the power of the maha-mantra
is so great that it vanquishes sinful reactions,
ushers in liberation
and brings one gradually to love of God,
even when chanted with imperfections
as I was doing.
(The items “relief from sinful reactions” and
“bringing liberation” are not the real goals
of chanting the Hare Krishna mantra – the real goals
are the development of devotional service and
love of God. But the first two are mentioned
as stepping stones on the path. I recite the lines about
the power of the maha-mantra as a
daily affirmation.) For a brief spell,
I felt the repetition of the Names was boring.
The lion of nama-aparadha stared me in the face.
I responded by becoming more serious
and deepening my concentration on
alertness – and I succeeded.
I met my quota after eight rounds
with ample minutes to spare. Then I
took some time to write in the Japa Report.

As I began the third set, the right eye twinge
was still present. Although it wasn’t great,
it was distracting and seemed to
announce that it was here to stay.
I took another pre-emptive strike
headache pill and waited for relief.
I tried to avoid mechanical chanting
by cultivating thoughtfulness and devotional feelings.
For being thoughtful, I adhered to “just hear.”
This enabled me to be attentive
to the individual mantras
and chant decently.
For awhile I grew a little drowsy,
but I consciously stayed awake
and did not crash into drowse.
For feelings, I thought of the sweetness of Radha-Govinda.
I acknowledged that Radha-Krishna are the heart
of the Hare Krishna mantra, consisting exclusively
of Their names and uttered as a prayer
to be engaged in Their service.
My right eye twinge reduced somewhat,
but it was still fragile.
I finished my rounds with
ample minutes to spare.
Then I turned to more writing in the Japa Report.

As I began the fourth set,
I was again beset with drowsiness.
(Probably due to not getting a full night’s rest.)
I struggled my best to keep alert.
I called out to Krishna for His blessings,
because it is not possible for me
to do good japa on my own endeavor.
Gaura Govinda Maharaj has written that
all over the world devotees should open
“schools of crying for the Hare Krishna mantra.”
He believes that devotees can actually
shed tears if they are conscientious.
I told him I could not cry like that, but
I sincerely call out in active attentiveness
and try to avoid the ten offenses.
I was falling behind, so I switched
from moderate pace to speedy.
In the course of the fourth set
my right eye twinge disappeared.
I estimated that I met my overall quota
with only a few minutes to spare,
or that I finished late.

I considered it a decent session despite
the various impediments.
I rated it “decent”
mainly because I steadily practiced
“just hear” the whole time. I preserved the
integrity of the individual mantras
with attention. Despite the inevitable
headache and drowsiness, it was
a sincere session.
At least I followed the process
of doing a prescribed number of rounds
in obedience to the order of the spiritual master,
a sacred vow.