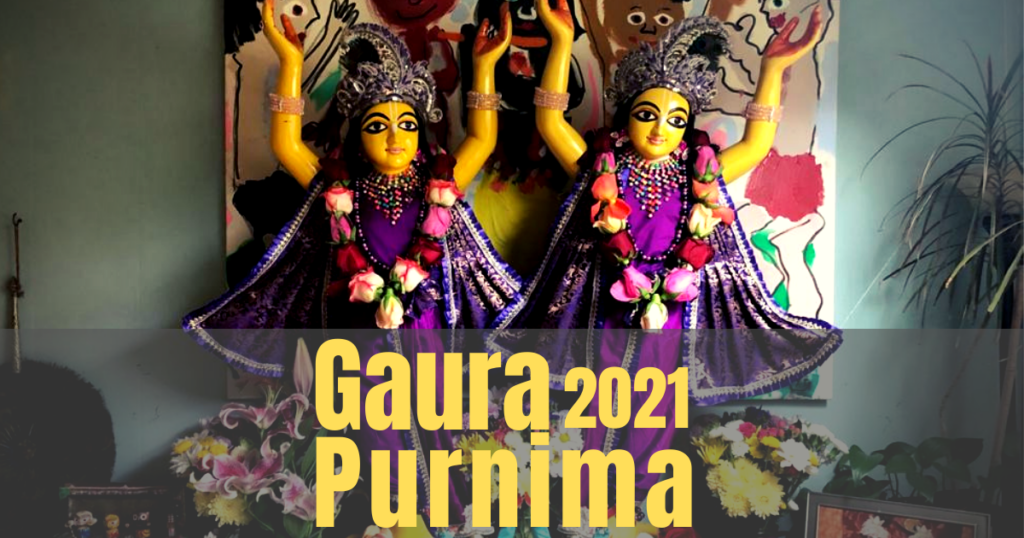 We will celebrate Gaura-purnima, the all-auspicious Appearance Day of Lord Sri Caitanya
Mahaprabhu, Sunday, March 28 in our ashram.

We will be sharing the festivities on Zoom: All are welcome!

We are preparing to observe Gaura-purnima in our ashram. We expect eight people will be invited to attend. From across the street, we expect Ravindra Svarupa, Saudamani and Sraddha to come. We hope Lalita-kaisori and her husband Atindra will also attend. Haridasa is trying to arrange that our Gaura-purnima talks and kirtanas can be projected on Zoom.

In preparation for my talk, I read from Caitanya-caritamrta where the author describes Lord Caitanya and hopes that the reader will take the Lord into the core of his heart. He says Lord Caitanya gave what no incarnation before Him gave, the mellow of conjugal love. He also states that Radha and Krsna are one. They were eternally separated, but now They have come together as one as Lord Caitanya. Lord Caitanya appeared in the mood of Radharani and assumed a resplendent golden color.

I also listened to a videotaped lecture Radhanatha Swami gave on Gaura-purnima in 2017. He spoke, mostly from Caitanya-bhagavata, many, many pastimes of Lord Caitanya and His associates. He spoke about the nocturnal kirtanas at Srivas Thakura’s home with Lord Caitanya’s confidential associates. When Lord Caitanya went to Jagannatha Puri, He held the same all-night kirtanas. They were very ecstatic performances, and Lord Caitanya led the chanting and dancing.

He told of a man who blasphemed Srivas Thakura by attempting to expose him as a Shakta devotee of goddess Kali. For this offense the man contacted painful leprosy. He approached Lord Caitanya and asked forgiveness, but the Lord angrily said he would only get more punishment. The only way he could be relieved from his sin was if he went to Srivas Thakura and surrendered to him. The offender did so, and Srivas Thakura embraced him and cured his leprosy and his bad mentality.

One of my favorite sections in Cc. is when Lord Caitanya returns to Jagannatha Puri from His tour of South India and many devotees come to join Him and take up service. Svarupa Damodara comes and surrenders to the Lord and becomes His personal secretary. Lord Caitanya accepts him and makes it a rule that any dramas or poems the devotees write should be first scrutinized by Svarupa Damodara before they can be brought to the Lord to hear or read.

Lord Caitanya’s Godbrother Govinda comes to join Him. He says that their spiritual master Isvara Puri told him on his deathbed that he should go to Lord Caitanya and take up service as His personal servant. The Lord is at first hesitant to accept His Godbrother as a servant, and He puts the question to His trusted friend and follower Sarvabhauma Bhattacarya. The Bhattacarya says that the order of the spiritual master is very strong, so He should accept Govinda as a servant as ordered by Isvara Puri.