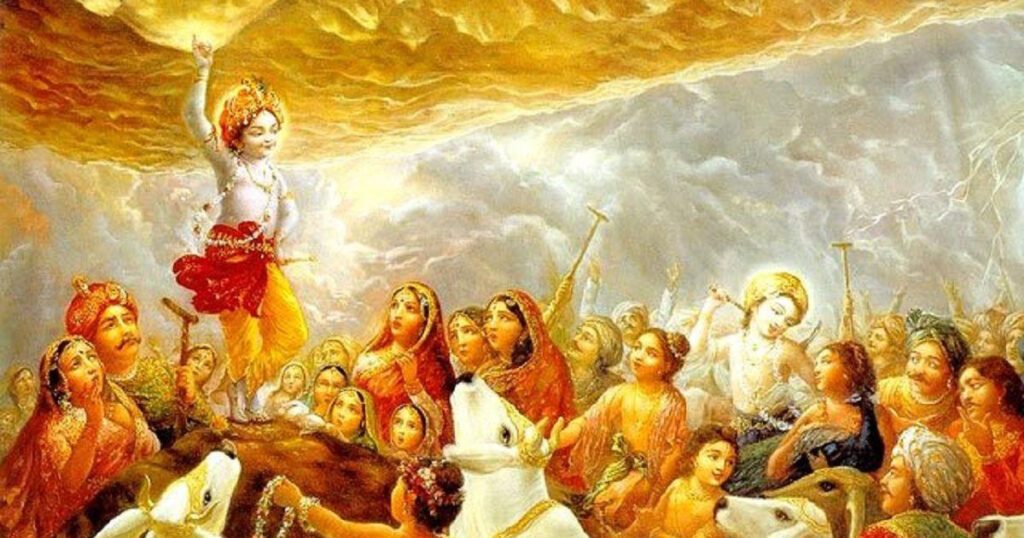 In my Govardhana talk I spoke from memory events narrated in the KRSNA book. This year I have found a new light to add to the talk I give every year. The story begins with Krsna and His friends seeing Nanda Maharaja and the other elder cowherd men preparing for a big sacrifice. Krsna is omniscient, so He knows they are preparing a sacrifice for Indra. But with great honor, etiquette and humility, he questions Nanda Maharaja: “Dear Father, what is this big sacrifice you are performing? Who is it for? And what is its purpose? I am very eager to know the details of this sacrifice.” At first Nanda Maharaja didn’t answer his son, thinking him too young to understand the intricacies of the sacrifice. But when Krsna persisted, “Is this by Vedic injunction, or is it a popular ceremony?” Nanda spoke to his son as follows.

Nanda Maharaja said, “This sacrifice is more or less traditional. Because Maharaja Indra supplies us with rain, we are obliged to him to offer a sacrifice. Indra kindly sends us rain so that we can raise our grains and agriculture. Rain is very important. Without rain we could not live. By rain we can perform our religious duties, our economic development and ultimately liberation. If one does not do the Indra-yajna out of fear or laziness, it does not look very good for him.”

Here we see Nanda Maharaja coming on as a great Indra bhakta, he is so strong in speaking his obligation to Indra, the king of heaven.

But in the presence of Nanda Maharaja and all the cowherd men and cowherd boys, Krsna speaks up in such a way as to anger Indra. Krsna says they should forego the sacrifice to Indra.

The argument went back and forth, with Krsna speaking as an atheist advocate of karma-mimamsa. These philosophers say that they don’t believe in God or demigods. They say if you act your duties nicely, you will get your results by karma. Nanda Maharaja disagrees and says that mere actions don’t bring about results. There has to be the higher sanction of the Supreme Personality of Godhead. At this point in the narrative, Srila Prabhupada injects, like a referee, and says, “This is actually the fact.” So Nanda is strong in his arguments supporting that they have to have an Indra-yajna. But Krsna persists and says, “Instead of offering a sacrifice to Indra, they should hold a sacrifice honoring the local brahmanas and Govardhana Hill. He says this sacrifice will please Him very much.

Then the narrative relates, “Nanda Maharaja finally relented.” Why did Nanda Maharaja relent? This year, while telling the story, I found a new light. I don’t think Nanda Maharaja relented because of Krsna’s arguments as a karma-mimamsa man. But when Nanda and the cowherdsmen understood what Krsna wanted, they agreed to do it. Like all Vrajavasis, Krsna was their heart and soul, and they only wanted to do what Krsna wanted. Nanda Maharaja didn’t relent because of Krsna’s arguments, but because of love for his son. They quickly turned to Krsna and asked Him to give them directions in how to perform the sacrifice for the local brahmanas and Govardhana Hill.