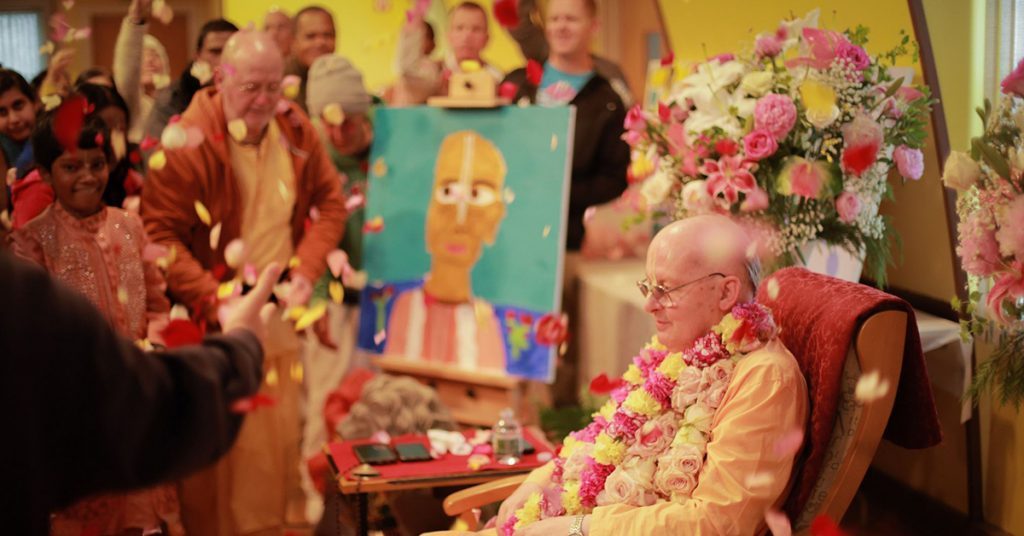 (short walk down the lane from Viraha Bhavan)

“. . . One of the devotees had discovered an old issue of a magazine published by Śrīla Bhaktisiddhānta Sarasvatī; the magazine contained a Vyāsa-pūjā homage Prabhupāda had written commemorating the appearance day of his own spiritual master.  When the article had been brought to Prabhupāda’s attention, he said that his disciples could also write their own appreciations, just as he had done forty years before.  So the devotees in New York had gathered offerings from seventeen different temples and had printed them all in a Vyāsa-pūjā booklet.

Prabhupāda was very pleased to receive the little booklet, and he had one of the devotees read it aloud in the temple.  When all the readings were finished, he explained how service and prayers were accepted by Kṛṣṇa through the medium of the disciplic succession.  Although outsiders might think that, “This man is becoming flattered in hearing his own eulogy,” the real meaning of a Vyāsa-pūjā homage is that it is a test of how well the disciples were understanding Kṛṣṇa consciousness and serving the spiritual master.  Their praises were all going to the Supreme Personality of Godhead through the disciplic succession.  And such praises were required training for the disciple, just as officers train soldiers in the military.  But in this case, the training was in the feelings of pure consciousness.”

SDG humbly requests that you please attend the festivities and share your understanding of Kṛṣṇa consciousness and service to the spiritual master.